Welcome to the Algorithmic Age 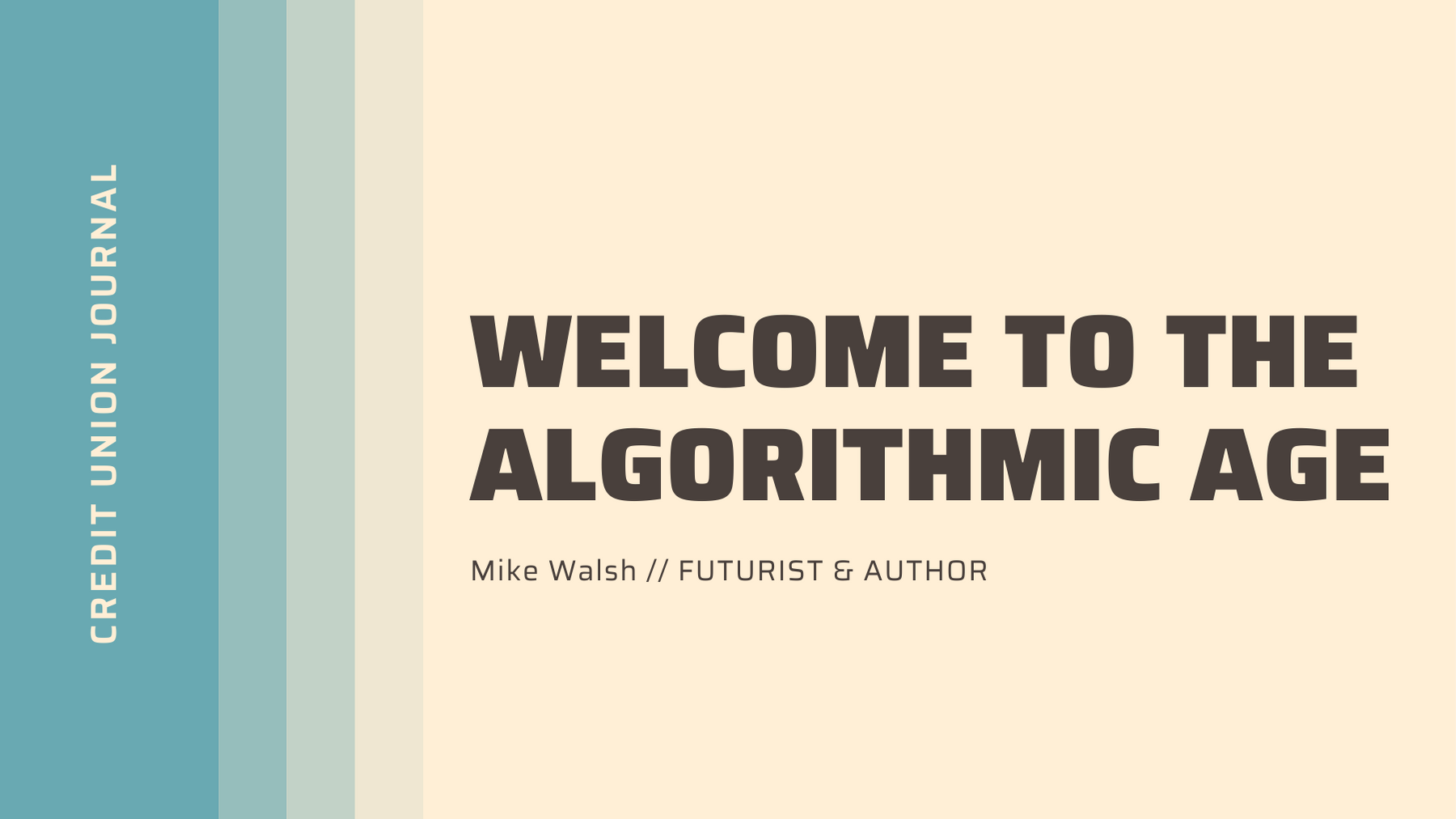 AUSTIN, Texas—The world is entering the “Algorithm Era.” Algorithms are already transforming society and business in ways we cannot even see. According to Mike Walsh, the key question to ask is: What kind of leaders are organizations going to need for an age of digital transformation? Walsh, a futurist and author, says there is a “widening gap” between the analog leader of the 20th century and the algorithmic leader of the 21st century.

Walsh kicked off the first day of CUNA CFO Council’s annual conference here Sunday, with the 2018 edition of the confab marking a milestone – this year’s version is the largest in the council’s history, with 550 attendees.

Walsh warned credit unions to begin preparing now for the future of financial services. He noted millennials currently make up the majority of the population in the United States, but he said by 2030 everyone will need to worry about children who are 8 years old today.

The next generation is going to be even more tech savvy, Walsh said, citing a recent study that found 90 percent of 2-year-old children have a sophisticated working knowledge on how to use a smart device.

“Today we are in an age of machine learning that allows computers to create experiences for us,” he reported. “The biggest influence on the future of business will be the algorithmic, data-driven experiences that kids now have on a daily basis. They are used to services such as Spotify suggesting songs for them, and they will expect other interactions to be similar.

Three “shifts” are coming to business, Walsh said. In the first, members will expect CUs to predict their needs without them asking, he advised. Retail giant Amazon does not have a business model, he assessed, it is a “business machine” that taps artificial intelligence. Amazon has developed algorithms that predict when people will buy an item, and can send it to a regional fulfillment center in anticipation of the order to speed up the eventual delivery.

In a second coming shift: interactions will need to be more personal. Kids today will be the first generation to be partly raised by AI – from Siri to Alexa.

“These services have changed the way kids, from a very young age, interact with information,” Walsh explained.

Concurrent with the rise of voice-activated assistants is the increasing use of facial recognition – which Walsh said soon will be the new universal password – and digital currencies. China has “reinvented itself” as a society that is largely post-cash, post-credit cards. Walsh said beggars on the streets of large Chinese cities do not want coins or bills, they want a donation directly to their phones.

Prepare to ‘nudge’ consumers to act

The third coming shift Walsh foresees is: Consumers will expect – and encourage – companies to be more persuasive about how people should live their lives.

“Companies nudge consumers via technology,” he said. “The Apple Watch has conditioned people to be used to being told to stand up, drink more water, get more exercise. In Japan, there are smart mirrors that tell you why your skin looks terrible and what products you should use to look better.”

Walsh said to succeed in this AI-driven future, companies of all types will need to constantly challenge assumptions about the future. He urged credit unions to learn from the youngest members of their teams. “After your new hire fresh out of college has been there a few weeks, ask what they find most strange about the way your teams work, make decisions and communicate,” he offered.

What will it take to be a successful and effective credit union in this new era? Some say the key is to behave more like a start-up, but Walsh said that is not easy as it sounds. A company of four people certainly can be agile, but it is much more difficult with a company that has hundreds of employees.

Walsh said qualities will be advantageous in the years ahead. For example, he noted Netflix hires people who can make good decisions in ambiguous conditions, while AirBnB wants people who are energized by unknowns.

“If you only hire people who like rules, your company will stop making mistakes – but if the market changes it will be in trouble,” he said.

In the next few years, computers and AI will change the functionality of many back-office functions at a credit union, but Walsh said CUs still will need to get the most productivity out of the humans who work there. The good news: the old-school method of having small, co-located teams working on a problem still is effective.

“This complex work environment must use data to maximize performance,” he advised. “With data, you can build a story for transformation. Designing an AI-first organization requires more than a technological upgrade, it demands a cultural operating system that allows all of your people to thrive. Data can even hack the culture of the organization. Identify and quantify what high performance looks like. Brainstorm with your high performers. Ask what kind of data would a competitor need?”

How much smarter do leaders need to be in the coming age of machines? Walsh said it is a myth that automation automatically decreases employment. In the first few decades of the Industrial Revolution, weaving machines did not kill textile jobs, they lowered the cost of making cloth, which led to more people buying clothes, which led to people being employed running the machines. Similarly, ATMs did not kill teller jobs, they made the cost of opening branches lower. Today, there are more tellers than there were in the 1970s because there are so many more branches.

“The algorithmic leader must have a deep understand of human complexity with a flair for computational thinking,” he said. “Leaders must be confrontational thinkers. They will need to face ‘impossible’ problems by breaking them into component parts. In financial services, people said it was ‘impossible’ to offer a life insurance quote online, instantly – until a company did it.”

Leaders will shift from doing work to designing work, Walsh said, adding that the new AI era demands 21st-century leaders not only upgrade their analytical skills, they will need to be ready to lead the transformation that needs to happen. He suggested CUs run a “decision” audit to determine which types of decisions are better made by machines/algorithms – leaving other types of decisions to humans.

“The future represents an invitation for all of us to think in an entirely new way,” he said. “All the great thinkers – da Vinci, Turing, Tesla – asked dangerous questions. The future is now.”