We Are Not Prepared For What Is Coming 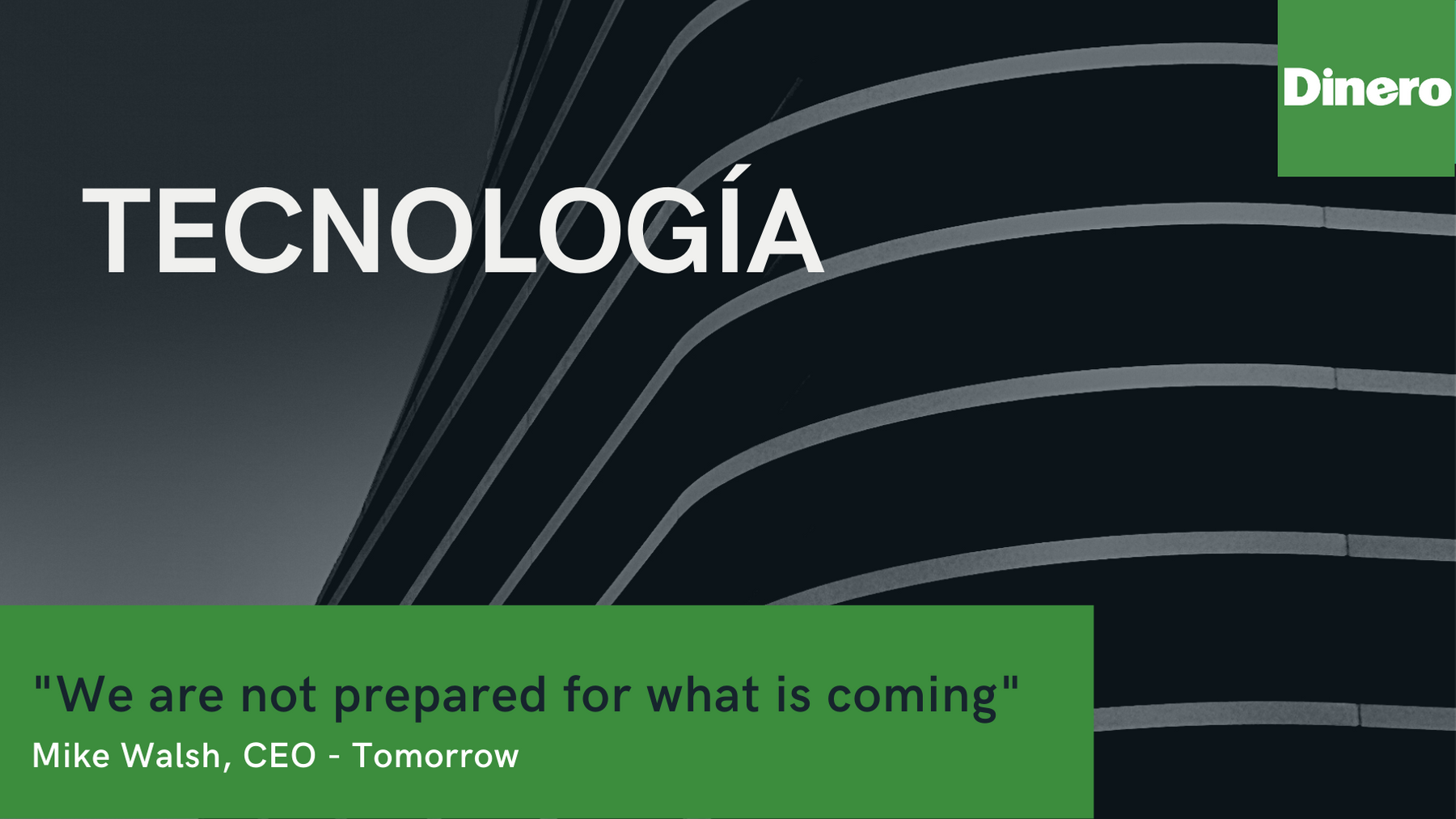 Australian Mike Walsh, CEO of consulting firm Tomorrow, is a renowned futurist in the international business world, focused on emerging technology and disruptive consumer behaviour. Dinero interviewed him exclusively to find out what will be the future of business in the world:

How do you see Latin America in innovation compared to other regions of the world?

I believe that in Latin America innovation is an idea, not necessarily a reality. There are so many markets, industries and countries, all in different realities and in different positions, but what unites Latin America with other rapidly growing areas of the world is not the locative culture but the youth of its population. That is the true driver of change, it comes from the consumer, not from the companies.

What technological gaps do you see in Latin America?

I think many of the organizations are still very traditional. There is a lot of process, a lot of paperwork, a lot of regulation and often, a lack of political will and courage to make the changes that have to be made. But a generational change is taking place. So I don't think technology is the problem. Technology is very open in the world, one can access services through the cloud very quickly, the problem is in the will of people to make the change. It is a matter of people, not technology.

What would you say to a company that is beginning this process of digital transformation?

The two key principles. First: customer obsession. You have to design for future customers not current customers. One of the things Amazon does, for example, when developing a new product is to create a press release for a product that does not yet exist, because they are trying to understand what this looks like from a human perspective, rather than how this reflects their corporate priorities.

Second, companies must look at the data. Because this data is going to be what will boost the ability to generate machine learning systems , to continue doing that cycle. The algorithm itself is not that important. You can know Google's algorithm, but you cannot reconstruct Google, because it does not have all the data and that is an issue in which traditional Latin American companies, even in Colombia, have an advantage: they have all the data, but they simply do not they have leveraged it in a way that transforms the customer experience.

The challenge for a company trying to go through this process is to find the data to leverage on to find even more data and advance the cause. And do it fast enough, before the other traditional companies.

Do you think that there is a dark side to machine learning or that it could negatively affect humanity?

We are already seeing it. Machine learning is not objective, you have to have an ethnography of the data, you have to understand where the data comes from, if the data is diverse and reflects everyone and what biases could have been involved in the data or in the design algorithms. The machines themselves are not dark, but they can perfectly reflect the dark side of humanity.

Do you have any negative examples of machine learning and how to prevent that from happening in the future?

There has been, for example, much controversy in the United States over the use of algorithms in criminal sentencing. They discovered that there is racial bias, because the machines were learning from the data collected and from the judgments that have been carried out on specific segments of the population, so they were accelerating the efficiency of a process that was already biased. The case of Dr. David Dao, the Asian man whose teeth were broken by dragging him out of a United Airlines plane, and people pointed to it as a case of poor customer service, is really an example of bad algorithmic design. There are a number of ways how an algorithm is designed and none of the employees had the power to say that there was something wrong with the algorithm and there was no way of knowing how the employees were going to behave.So they called the police and dragged him out of his hair.

What do you think about what is happening with blockchain and the frauds around bitcoin in Latin America?

I think there has been a curious characteristic in that Colombian criminals always manage to innovate with new technology. This is not a new phenomenon. But one must separate blockchain and bitcoin. Blockchain is probably one of the most important innovations, just as important as the creation of the internet. And in the future there will be entire organisations without people, based on smart contracts. There is no blockchain solution for all problems, but there is for many.

Bitcoin is also not a new phenomenon. Human beings are very susceptible to stories of rapid enrichment: the pyramids, the Germany of tulips, speculation is also a very old idea and we saw that in the late 90s with the first internet boom, there are many similarities between the ICOs and the first .coms, but I think that when the waters calm down, people will sit down to look at the smart contracts and see what will be the best way to settle all the issues that are within a contract. If you look at the two forces: automation and blockchain, all the processing that happens in the back office is going to revolutionise in the next 5 to 10 years and that will change, for example, the nature of what a bank, a company of media, a retail company, a stockbroker, logistics companies, etc.

Do you think that at any time cryptocurrencies could become the currencies of a country?

But the biggest story, which is not being looked at well, is the impact of all these issues on employment. We still do not understand how automation, machine learning, is going to restructure the workforce. The last time this happened was when agriculture was revolutionised and they had to reinvent the educational system from kindergarten to eleventh grade to retrain the workforce and face the new.

Do you believe that in the world, the educational system is lagging behind what is happening with technology?

We are not prepared for what is to come. We continue to teach children in a completely obsolete way compared to the technology that is already on the market. We are preparing them for professions that may not even exist.

What should be the ideal educational system for this time?

Looking back at where we are going to go, the most successful companies of the future will be more decentralised, with more empowered, more autonomous teams. The leaders in those organisations are going to have to be not only highly analytical, but also humanistic. If you can automate obvious transactional activities, you would need people who are great at solving problems, who can handle exceptions, and who can probably speak the new languages ​​or languages ​​of power. There are going to be specific business languages ​​that are going to resemble programming, but that are going to allow business leaders to essentially create their own algorithms to automate decision making, as seen for example in the financial markets today. This is going to be seen in marketing, in logistics, in treasury and financial services. So the educational system, by far, is not ready for this new world.

Is there a country that is doing well?

There are many experiments. For example, there is a lot of work around computational thinking as a new discipline. That children, for example, using Minecraft is one of the best platforms to learn. If you think the answer is obvious, it is probably wrong.

You look at great leaders like Masayoshi Son, president of Softbank in Japan. A few weeks ago I met different leaders of your company and asked them "what is Masayoshi Son's secret?" The answer I found is that he doesn't try to imagine what the next big thing is going to be. He thinks about how people are going to be in 50 years, how he is going to live, how he is going to work, human life and he returns to think about what kind of company, services and infrastructure would have to exist to enable all of that. If you can find something like that, buy it or invest in it, and if you can't find it, you're going to encourage people to start that style of companies. Elon Musk has the same attitude.

Do you think there is a bubble around those tech companies like Amazon or Tesla?

Yes, at the moment, people are valuing these companies as if they can solve all problems. But it may simply turn out that they cannot execute what their own ambitions are. There is a point of view that says that a company like Amazon that has so much data, that has so much information, could perhaps be undervalued.

What do you think of what is happening in politics regarding new right-wing trends, populism and anti-globalization?

People are blaming globalisation, but finally what we are going to end up realising is how technology will end up changing the class structure and it will not be for the better. People think that because they can order food from their mobile phones, the future will be good for them. But there really is a risk that in the future there will end up being 3 types of people: you may be one of those who are working for the algorithm and life there is not very good; or those who are working on the algorithm and you are in that small percentage of highly paid professionals; Or you are one of those 0.0001% who own the algorithm, at which point you will be part of an aristocratic class, much richer than any other class that has ever existed in history. Those are the sons of Zuckerberg, Musk ... a crazy world, it's not science fiction, we are already living it.