How To Optimise Your Decision Making 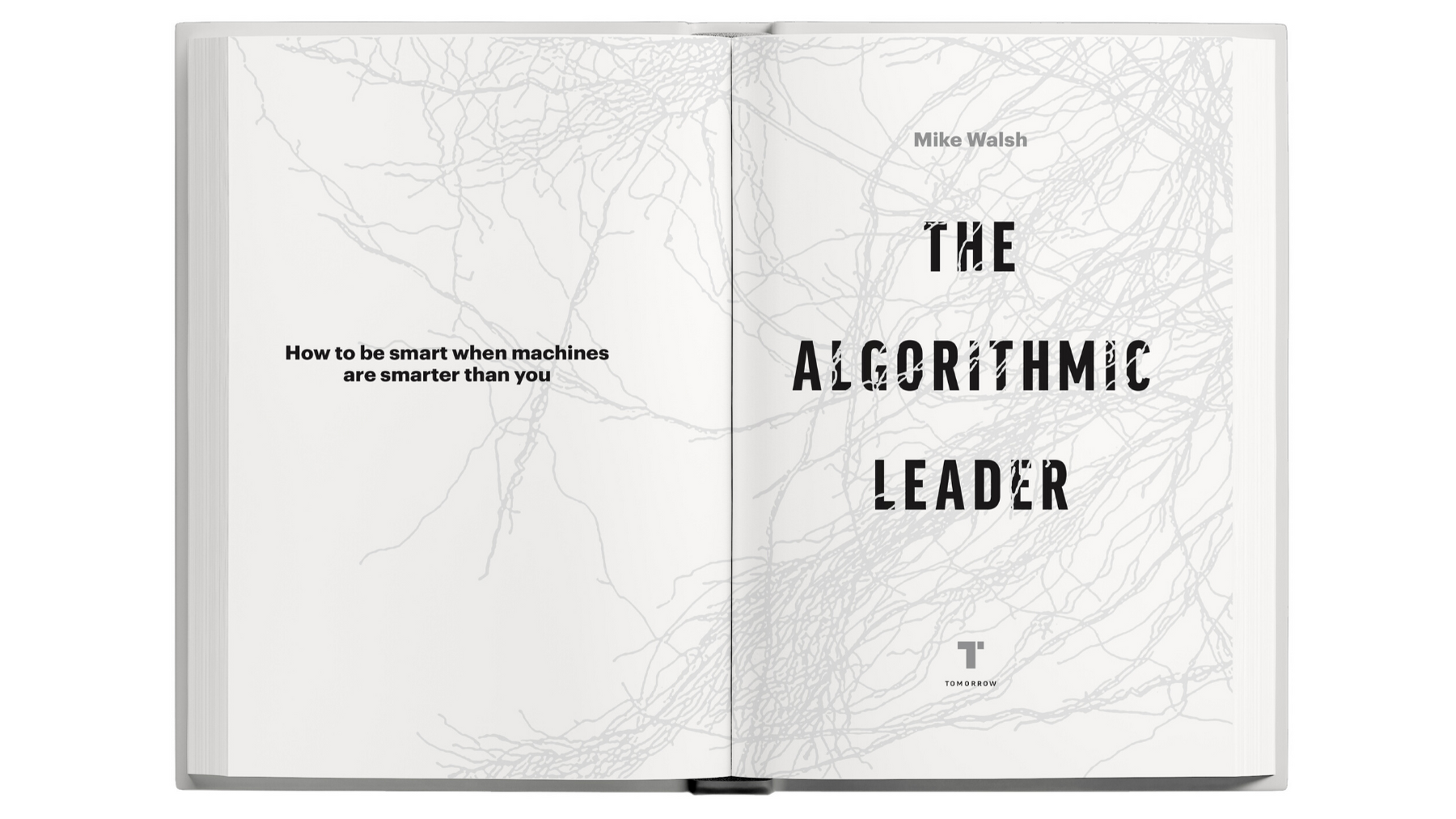 Ron Immink, author, speaker and self-described entreprenerd wrote this review of futurist Mike Walsh's new book, The Algorithmic Leader. In his piece, Immink focuses on what it takes for leaders to optimise their decision-making using machines and algorithms.

I am taking a bet that you spend very little time thinking about thinking or how and why you make the decisions you make. Let alone how you can use AI to do that even better and consistent.

Once you have read “Principles“, you should be looking at your business in a different way. Before “Principles” there was “Making money is killing your business“. Your business as an engine or combination of (decision making) processes. That is why I started to read “The Algorithmic leader”. Managing and optimising your decision making as a leader, using and applying machine learning.

Algorithms are not some computational incantation that somehow bring machines to life. They are more like a recipe for baking a cake: a step-by-step process (mixing ingredients) to solve a problem The very concept of an algorithm predates the modern computer by several thousand years; it can be traced back to some of the greatest minds of the ancient world who also used algorithms to think through difficult challenges.

With the advent of deep learning, computers can train themselves on datasets that contain millions of inputs and outputs, evolving as they do so. Being smart when machines are smarter than you require you to become something new. You can safely assume that if something can be automated, it will be—if not by you, then almost certainly by one of your competitors.

And unlike a human being, an algorithm will come to the same conclusions every single time, whether it is Monday morning or Friday afternoon, cold or hot, or after the algorithm has handled thousands of similar cases.

Soon algorithms will shape almost every aspect of our lives. They will determine our right to enter a country (US Customs now requires you to share your social media handles on request), buy train tickets (as happens with the social credit system in China), or shop at Amazon (Amazon can fire you as a customer if you start returning too many high-value items). Our refrigerators will keep track of what we eat, our toilets will report on our physical health, or our shoes will vibrate to alert us to walk in the direction of something we might find personally interesting.

It has been estimated that an adult might make around 35,000 decisions every single day. Your kids are unlikely to be in that position, given that an increasing number of their choices are being automated for them. Once you have experienced a world where your decisions are handled for you by smart algorithms, there is no going back. Those born after 2007, is the first not only to have had access to smartphones from birth but also to have been completely immersed in algorithmic platforms.

The next big shift in interface design is the move toward more natural interactions. Our bodies are becoming interfaces. Whether it be smart speakers or sensors, smart tattoos or augmented reality glasses, we are learning to sense and respond to data in a more intuitive way. The more natural the interface, the more likely we are to start forgetting about the algorithmic machinery hard at work in the background. Instead of automation creating more standardised experiences, your future customers will expect you to leverage machine learning to create more natural, personalised, human-level interactions. Human-level interfaces that understand our natural speech, recognise our faces, respond to our emotional states, and even track our gestures will be useful. They will allow us to effortlessly communicate our intentions and accomplish our objectives without resorting to command interfaces and workflows. Algorithms and data make “anticipatory design” possible.

When algorithms become deeply embedded in our daily lives, they have the potential to greatly influence how we behave. If we reach that point, we will no longer be able to easily discern how much of our memory, experiences, tastes, or even our own identity is native to us and how much is merely the technological extensions of ourselves.

Optimal design of your business

So the question to ask is; if an AI were to design an organisation optimised for machine learning, how would that company operate? If you could start your business again with a clean sheet of paper and the ability to leverage AI, algorithms, and automation, what would you do differently? You need to become an algorithmic leader. The job of an algorithmic leader is not to work. Their real job is to design work. Here are the tips from the book to become one:

Imagine what services might be made possible? The best way to imagine a future shaped by AI is not to focus on machines and their current capabilities but to think about the potential interactions between algorithms, human behaviour, and identity. Imagine a future without your company in it. If firms only exist to either reduce or eliminate transaction costs, what if technology like blockchain could do this more effectively? Would the firm as a concept still need to exist in its current form? In the future, some firms may operate without people or locations. They will be “decentralised autonomous organisations” based entirely on smart contracts that react to data and other algorithms. Imagine what life might be like in ten years. Build a picture of what life might be like in thirty years. He then asks himself what technologies, business models, and infrastructure might, therefore, need to be in place in fifteen years, ten years, five years, and next year.

The book is full of examples

Publicis, a multinational marketing company, has already started using algorithms to organise and assign its 80,000 employees, including account managers, coders, graphic designers, and copywriters. Whenever there is a new project or client pitch, the algorithm recommends the right combination of talent for the best possible result.

IBM has also applied for a patent for a system that monitors its workforce with sensors that can track pupil dilation and facial expressions and then use data on an employee’s sleep quality and meeting schedule to deploy drones to deliver a jolt of caffeinated liquid, so its employees’ workday is undisturbed by a coffee break.

Rolls Royce builds a virtual copy of every engine they make, combining data insights from throughout the business with design and manufacturing data, resulting in a perfect digital twin of their underlying physical asset. The Rolls-Royce Trent engine is an early example of a digital twin. A digital twin is a digital model of a physical object or process that allows you to optimise its performance. You could build a digital twin of a manufacturing line or a factory, a self-driving car, or even just a small component in a larger system, for example.

Google spent two years studying 180 of its teams. It called the study Project Aristotle. The researchers discovered that the best teams at Google exhibit a range of soft skills or “group norms”: equality, generosity, curiosity about teammates’ ideas, empathy, and emotional intelligence.

For Bezos, there are two categories of decisions. Type 1 decisions are the mission-critical, high-impact choices that influence higher-level strategy and can determine your future; Type 2 decisions are the lower-stakes choices that can be reversed if need be. You are better off acting on or even automating Type 2 decisions as quickly as possible. Amazon’s senior leaders typically leave all Type 2 decisions to the teams and individuals below them so they themselves can focus on Type 1 decisions.
Rakuten created its own algorithmic brain trust. Every quarter, all the senior leaders gather to discuss data.

When you arrive for an appointment at Forward, you are scanned by a full-body scanner that checks multiple physical attributes and downloads the diagnostic data collected by your wearable devices about your physical activity levels and heart rate.

A bank started to track who was talking to whom in the company, and what the social network looked like. Then, using just those metrics, they tried to predict subjective and quantitative ratings of performance for different employees as well as self-reported job satisfaction levels. The data from even these simple employee interactions proved to be an incredibly accurate predictor of performance.

IBM has also applied for a patent for a system that monitors its workforce with sensors that can track pupil dilation and facial expressions and then use data on an employee’s sleep quality and meeting schedule to deploy drones to deliver a jolt of caffeinated liquid, so its employees’ workday is undisturbed by a coffee break.

Good decisions should be difficult. Their difficulty reflects the challenging nature of the topics and issues they relate to; they require strong cognitive skills if you are to arrive at a good solution. If your decision doesn’t seem difficult to make, you are probably not asking the right questions.

The British Empire, expanded globally over a hundred-year period until it managed over 20 per cent of the land on the planet without any direct control from the centre. Buccaneers, tradesmen, and merchant seamen were given lots of delegated decision making in a highly self-organised fashion. When messages went from being transported by ships, with a send and receive time of six months, to a mere six minutes, everything fell apart. Because, as Parsa explained with a wry grin, the centre suddenly started to micromanage.

Under the General Data Protection Regulation, which came into effect in 2018, the European Union requires companies to be able to explain a decision made by one of its algorithms. Which means there will be lawsuits that require you to reveal the human decisions behind the design of your AI systems, what ethical and social concerns you took into account, and how well you monitored the results of those systems for traces of bias or discrimination. Document your decisions carefully and make sure you understand, or at the very least trust, the algorithmic processes at the heart of your business. If an AI causes a deadly mistake, who is ultimately culpable: the programmer who designed the algorithm, the data scientist who chose the training data, the safety engineer who failed to intervene, or you, the business leader who approved the optimisation target?

In the future, you will be either working for the algorithm or if you are lucky, on the algorithm. What happens when more and more people are employed as part of a transient workforce governed by algorithms? For example, courier nomads may have the latest holographic phones, bone-conduction headphones, and low-latency, augmented reality eyewear, but make no mistake, they will be the physical manifestation of a new algorithmic underclass. Even within organisations, you will find growing inequality and a widening gap between top executives and an outer fringe of transient workers.