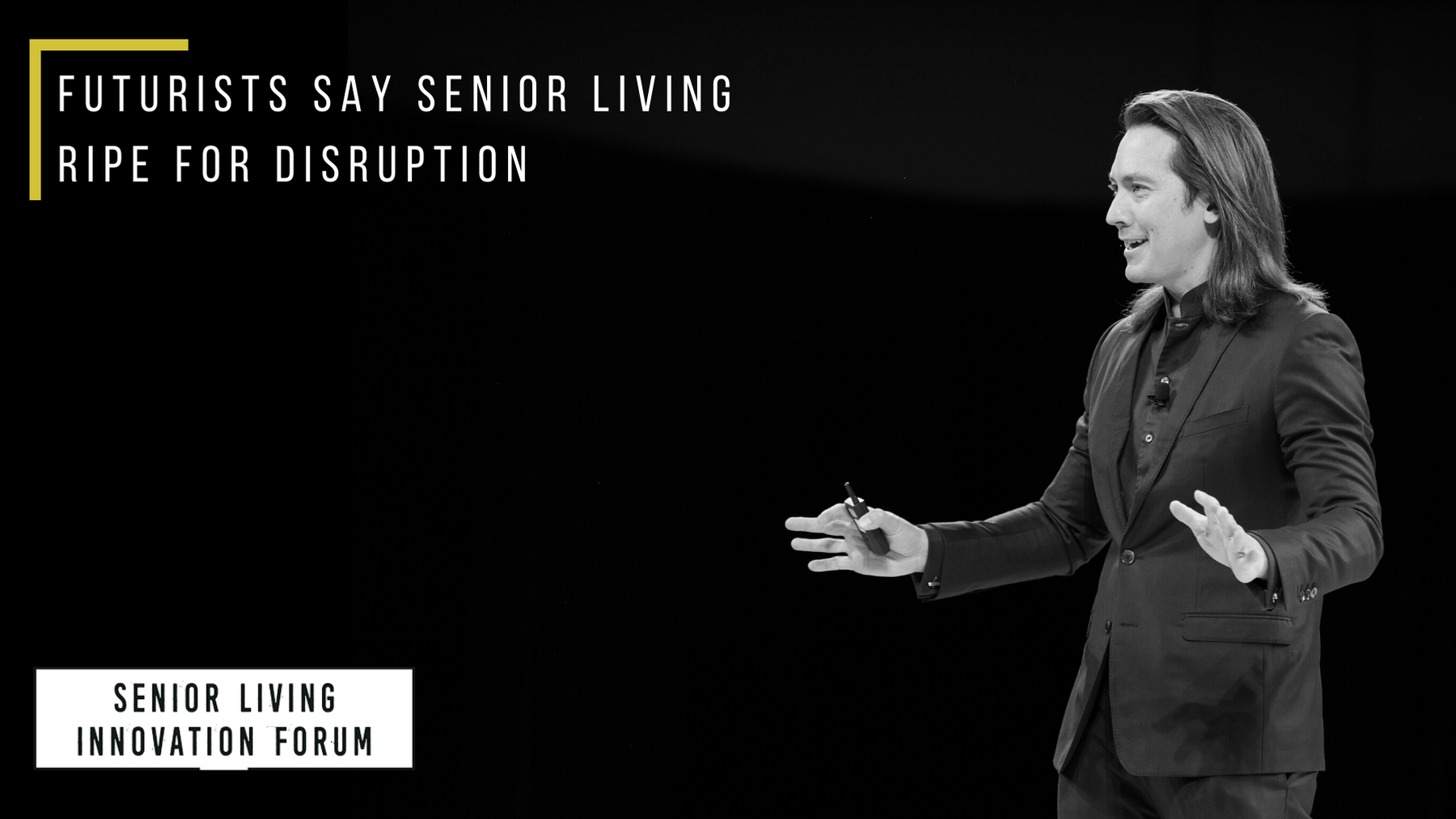 The senior housing providers that “actively try to put themselves out of business” will be the most successful in 20 years, says author and futurist Brian Solis, while AI is going to help millions of seniors maintain independence and avoid isolation, says fellow futurist and business strategist Mike Walsh.

From voice tech to AI to robotics, without question, technology is having an impact today and will have an even greater effect in the near and distant future, Solis believes. “All these technologies will impact senior living communities and care,” he said.

“What we’re seeing already is the easy-to-embrace technology impacting our day-to-day lives, starting with voice-activated devices. That’s because voice is essentially affordable and approachable by users and facilities alike.”

Walsh takes a historical perspective, stressing that it often takes a while -- years even -- for business and society to make the best use of new developments.

“With new technology, the gap between hype and usefulness is often not the hardware or software, but the time it takes for consumers and application designers to figure out the right way to utilize new services,” he said.

“In the next few years, voice interfaces, facial recognition and wearable sensors will make it possible to monitor our health, respond to emergencies and orchestrate experiences for us in a seamless way - all of which will make life for seniors easier and more interesting. The only thing holding us back right now is imagination.”

Already available in medications like Abilify MyCite, which is used to treat schizophrenia, pills with ingestion tracking systems will become more standard over the next decade, Solis predicted. With this technology, an ingestible sensor embedded in the pill records that the medication was taken – sending signals to a wearable patch that then transmits the data to a mobile app.

Solis sees this tech being used in medications that treat a range of conditions, not just behavioral health issues. Intriguingly, he also foresees a “Fantastic Voyage” scenario in which health will be improved by tiny, ingestible electronic devices – chips and nanorobotics – that will be programmed to address specific health issues. “These are on the horizon right now. In many cases, it’s just a matter of approval and profitability.” Nanorobotics is the technology of creating machines or robots at or close to the scale of a nanometer, one billionth of a meter.

Seamless memory aids will reduce the signs of early dementia. “Another interesting trend will be the growth of whisper-tech, or smart AI-connected devices that we will wear in our ears, or interface with our existing hearing devices,” Walsh said. “These will whisper relevant information to us, whether it be people’s names or facts, reminders or insights about locations - to aid memory as it starts to fail.”

Solis added, “Wearables and ingestibles are going to be massive. They’re currently riding under the surface. We’ll also see greater use of Apple Watches and other wearables that haven’t hit the market yet,” including a number of more focused, fixed-purpose wearables.

“All of these technologies and medical advancements, combined with wellness, health and nutrition, are helping people live longer and will continue to do so in the years to come. The question is whether most seniors will have access to the things that allow us to become self-sustainable,” Solis said.

These systems are being developed and supported by private institutions and companies, not industries that are concerned with society. They’re locked up by policies and legacy industries, like healthcare and insurance.” Outdated laws and regulations, he believes, are also blocking change.

Seniors are living at home longer, but many industry leaders point out that they’re lonely, isolated and depressed. Walsh believes affordable tech will bring friends and family closer.

“Smart screens are a game changer for seniors who want to stay connected to their friends and family,” he said. “Right now we have desktop devices that initiate calls by simply asking for someone, but soon, as the technology becomes cheaper, we will essentially have smart wallpaper that can become a video screen into another home or a different location, or telepresence robots that allow us to travel and experience places through virtual reality.”

The Trend to Watch

Walsh also believes artificial intelligence will play a life-enhancing role. “AI is the technology trend to watch. Smart speakers like Alexa or Google Home are really just the tip of the iceberg. In the near future, AI platforms will be able to harness our data to start to anticipate our needs without us even articulating them,” he said.

“Groceries will arrive without us having to order them, maintenance people will turn up to fix appliances that haven’t broken yet because a data model predicted their failure, and our homes themselves will deploy circadian lighting, purified air and subtle automation to make us healthier and happier."

An easy-to-grasp idea, experience design is a difficult concept to execute. However, it’s essential for senior housing and other industries to fully embrace the principles, Solis said. Experience design is the practice of designing products, processes, services, events, environments and more with a focus placed on the quality of the user experience and culturally relevant solutions.

“For senior living to thrive, everyone in the ecosystem needs to have positive experiences that matter, from the resident, to their families, to the administrator to the caregivers,” he said, adding that too many environments are uninviting and team members unenthusiastic.

“And, for the most part across many industries, experiences aren’t intentionally designed to generate positive outcomes, they’re just a matter of functions that companies are looking to scale, to optimize or develop,” he added.

Though his focus is tech, Solis believes the least significant aspect of this discussion is technology. “We must find a way to value the individuals in this equation, both the caregiver and those being cared for.”

The Silicon Valley veteran is a big believer that many industries which tout their innovative approach are really just embracing variations of iteration, making small gradual improvements to services, infrastructure, etc. without really embracing innovative change. Iteration is a necessary practice, but it doesn’t generate transformation.

“Rather than ask how competitive you want to be, the question should be ‘How relevant do you want to be?’ Innovation is a form of competition,” he emphasized. “I think a lot of industries are intimidated because they associate innovation with the tech industry. They think it’s only about developing revolutionary products. But it is really about a shift in perspective, in doing things differently, to empower yourself to go down different paths, even if it takes away from the bottom line temporarily.”

Even better than innovation? Disruption. “Trying to put yourself out of business is the secret recipe to longevity.”

Where Will Disruption Come From?

From Chick-fil-A to Airbnb, SLIF has asked leaders from other industries what senior housing can learn from their business models. And the question continues to crop up—where is senior living’s Amazon or Uber?

“Most industries need to be asking where the disruption will come from, but we’re all looking for easy answers. The truth is that there are no overall industries to look at for inspiration, though there are leaders and individuals within industries to admire,” Solis said.

He says a number of companies that lead in certain areas are still behind the eight-ball when it comes to embracing tech, but a handful of outliers are proving that innovation is possible, even for established brands. “Lots of industries can look to Dominoes, which has reinvented itself as a tech company that makes pizza.”

He adds that the companies we think of as “disruptors” are well established by today’s standards. “Uber is 10 years old and the taxi industry still hasn’t figured out how to compete, while Amazon is 20 years old and retailers are still trying to figure out how to compete. We should all be asking where the next big disruptor will come from...or is it already here?”

“As our population ages, there is incredible scope for innovation and new product development that addresses the shift in demographics. Japan is a great example of how a mature country with a rapidly changing population, is leveraging robotics and automation as a 21st-century strategy to turn what might be a serious productivity problem, into an opportunity for reinvention.”