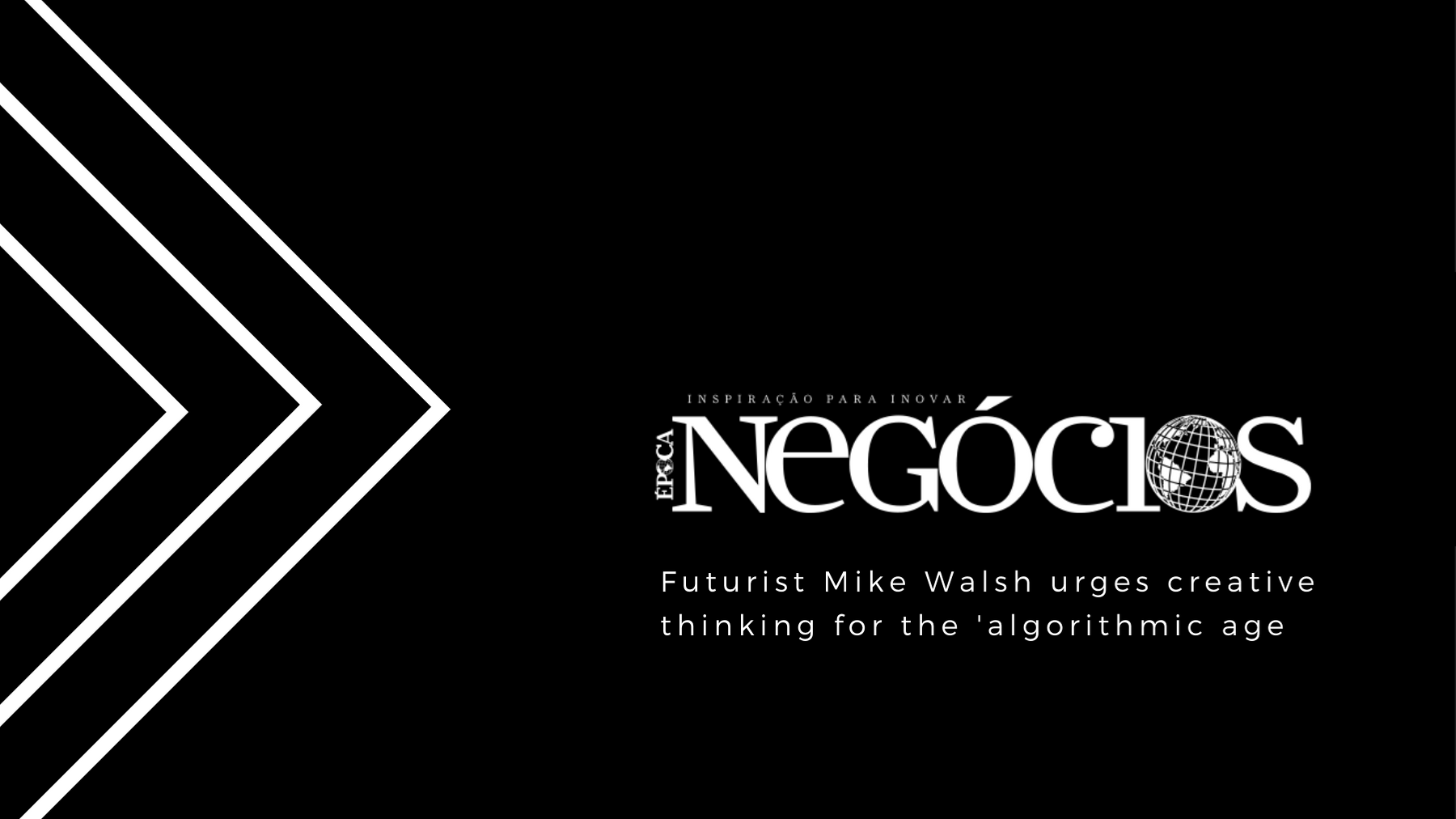 Artificial intelligence , machine learning , blockchain, electric cars. If, at some point, you related these topics to companies of the future, know that you may be mistaken. At least, that's the opinion of Mike Walsh , futurist, writer and CEO of consultancy Tomorrow . In his view, companies of the future will still depend on people.

Author of the books The Algorithmic Leader: How to Be Smart When Machines Are Smarter Than You , Futuretainment and The Dictionary Of Dangerous Ideas , Walsh visited Brazil at the invitation of KES . The writer spoke exclusively to Época Negócios .

In the chat, he discussed the future of companies, privacy, the impact of technology on labor relations and even gave his opinion on how Brazil can behave in the coming decades. You could say that Walsh knows the country. In the last 15 years, he has been here at least five times. “Brazil will never be Silicon Valley . You have to find your own way, ”he says.

Below, see the best moments of the conversation:

You promote the idea that the planet is a big connected city. Tell me more about that.

The idea of ​​connectivity has several manifestations. The most visible, in my opinion, is that of supply chains . I think the idea of ​​charging and charging taxes on imported products today is ridiculous. When you look at a product, you need to see it as a manifestation of a globally interconnected supply chain. This is globalization. What I mean is that just about everything we use today has been “touched” by potentially millions of people around the world. This is the magic of the 21st century.

But the idea is not limited to supply chains. You have to think about information, algorithms and big data too. The winners of the future will be global platforms capable of collecting data from different markets to create personalized products and better experiences. Take Netflix , for example, which uses Swedish user data to create products aimed at the Indian market. The next step in competitiveness will be formed by players who are able to scale globally using algorithms and big data.

But what cannot be missing in the company of the future?

The company of the future will depend on people. The real competitive advantage will come from the ability of people to create disruptive solutions to problems. It will offer creative ideas and understand system failures, being able to make high quality decisions on a large scale. And that's where technology comes in. The companies of the future will have to be able to creatively combine humans and machines.

In this equation, what is the weight of each side?

I think the way out is to find the right workflow. For this, we need to ask some questions: how to identify the decisions that will be automated? How do you know when a human being should work in partnership with machines? When should robots be more present than humans? People within companies need to think about this.

Of all the technologies that have advanced in recent years, which one is most impressive?

There is no doubt that the most significant technology in recent years has been the resurgence of machine learning and deep learning , because it has changed the way we think about computing. Even in the digital age, there has always been a human behind software, defining 100% of how technology works. Now, the scenario has changed - and so has the understanding of programming.

Today, it is possible to create new types of experiences from a massive amount of data, allowing systems to learn on their own. That is why we are going through a time when artificial intelligences are becoming more and more accurate. From one day to the next, Google Translate just got a lot better. A day will come when we will talk to Alexa [ Amazon's virtual assistant ] as if it were someone else at home. And it will happen overnight.

And which one scares you the most?

None, in particular. What scares me the most is the idea that we humans are creating a world that we don't want to live in. If we forget the importance of purpose and meaningful work, if we use algorithms to manipulate and control the population, we will return to an old idea of the Industrial Revolution , in which humans are only part of the machines. In my view, the only difference is that we are now using more sophisticated approaches.

In your lectures, you say that we need to prepare for what is to come. What's to come and how to prepare?

Increasingly, companies will be made of algorithms. We need to understand - the leaders, especially - that it is the development of this technology that will determine the consumers' experience. Even so, I don't see companies intentionally thinking about improving in this regard. I don't see entrepreneurs reflecting on these lines of code. I think that needs to change. It is necessary to think about the experiences we want to deliver, and then ask a question: are we using technology in a constructive and empowering way?

And the question of structural unemployment caused by technology?

It is difficult, because people imagine that, conceptually, technology can take jobs, but the truth is that this is still not being seen. Which doesn't mean it won't happen. A perfect example is that of Kodak , which broke record sales of films for analog cameras a year before the arrival of the digital camera. It is difficult to predict the future, because everything can change suddenly. As much as we have seen changes in recent years, I think we are not close to what the arrival of artificial intelligence can cause. We are not yet feeling the pressure that will transform the nature of work. But we are close to that.

And how do you see the future of Brazil?

You know the bad joke they talk about Brazil, right? They say that Brazil is the country of the future and always will be. I think the country has an opportunity to recognize its weaknesses, to rely on its qualities and to try to position itself for the future. Brazil is not going to become Silicon Valley. You have to find your own way.