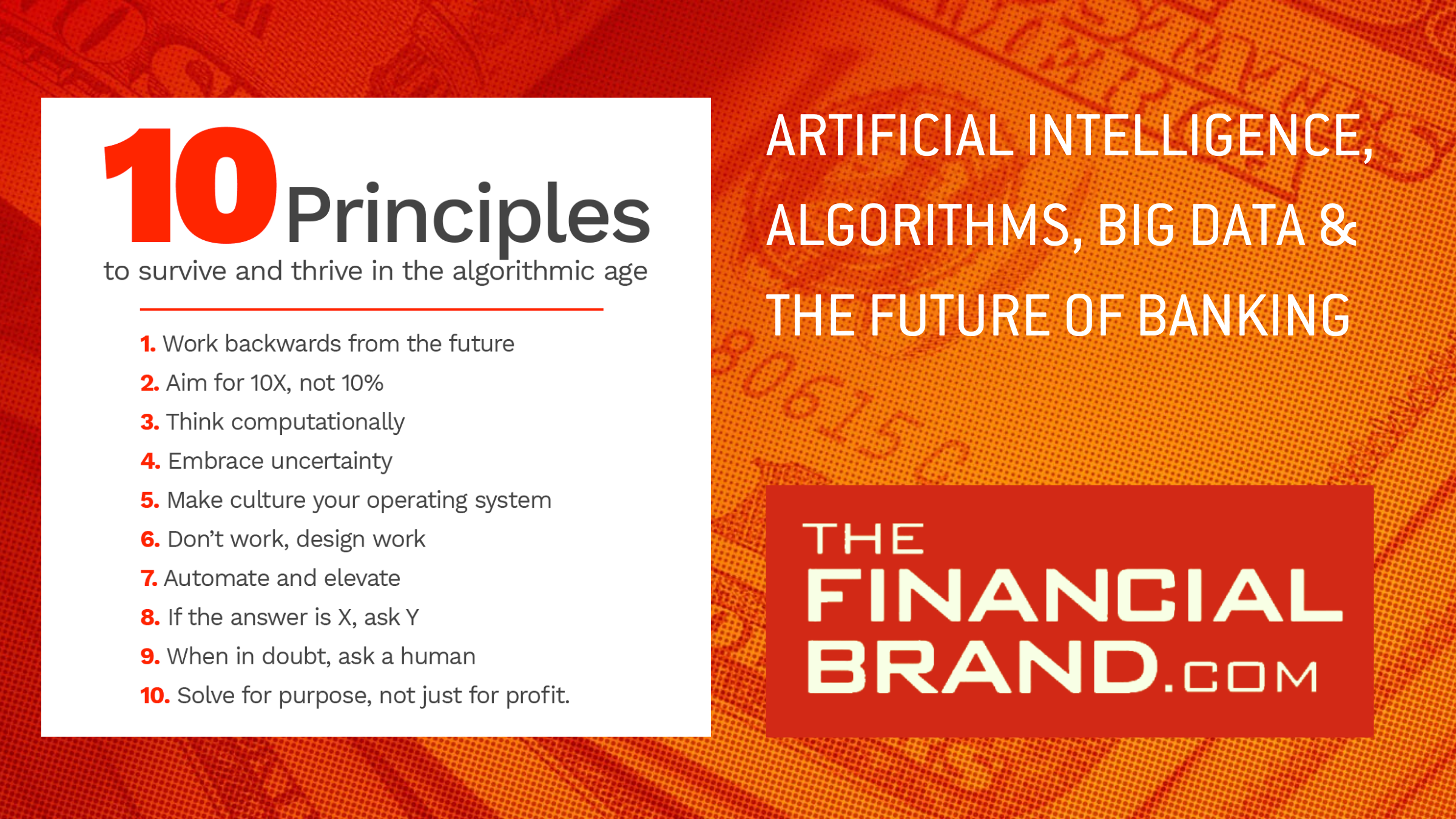 Futurist Mike Walsh has good news and bad news for financial services executives leading and working in the Algorithmic Age. Jobs won't go away, but they will change radically and sometimes the smartest move will be to kill your own job and reimagine the process and your place in it. He discusses his 10 principles for survival in the new digital ecosystem in an exclusive Banking Transformed podcast interview.

We live in an age where payments to other individuals or companies can be made with a single push of a button on a smartphone, where purchases can be made in an instant, and where loans can be applied for without meeting a person face-to-face. In addition, cars drive themselves, robots mimick human movements, and privately funded rockets soar into space while sending their boosters back to earth to land themselves for reuse.

While modern technologies, data, advanced analytics and automation are transforming every facet of daily life, most organizations and executives are not fully prepared for what these massive changes mean to the role of leaders and for the future of work. Employees at all levels of the organization fear what these lightning fast changes will mean for their occupations. Will these jobs simply be modified based on new applications of data and insights and new digital tools? Or will they be eliminated?

In his book, “The Algorithmic Leader: How to Be Smart When Machines Are Smarter Than You,” best-selling author and international speaker Mike Walsh provides a guide for how leaders in all industries can succeed in an era of unprecedented change. He offers ten core principles to help leaders design their own personal transformation, harnessing the power of data, advanced analytics and enhanced insights which will help their company, their team and themselves.

In an exclusive interview of Mike Walsh for the Banking Transformed podcast, we discussed the leadership and cultural changes that are required to respond to a new business paradigm. We covered how leaders can make better decisions at a time of digital disruption, embracing change, taking risks, and leveraging technology in partnership with humans for a better consumer experience. His suggestions were both exciting and a bit unnerving.

It is clear when talking to Walsh that digital transformation in banking or any industry isn’t just about technology. It’s very clear that the shift that organizations must make has as much to do with people, processes and cultures as it does with the technology we put in place.

Is digital transformation more about technology or the underlying culture and leadership changes?

Walsh: Digital transformation is actually such an awkward and confusing phrase and it often creates the illusion that it’s something you can buy and install or essentially upgrade to. If it were only that simple. The biggest problem is that you can spend a fortune upgrading your core, or moving all of your customer assistance components to the cloud, or embracing automation, artificial intelligence or machine learning to analyze your data. You can do all of that, but it won’t profoundly change who you are and how you do things.

I often like to say that technology is essentially the hardware of your business, but if you really want to transform you’ve got to figure out how to make culture your operating system. This is culture in the sense of how your people do things, how they solve problems and how they make decisions. It’s the heuristics of the way people approach situations. It’s unfortunately the very thing you can’t buy or copy … it’s something you must learn for yourself.

Does this require more than just understanding the role of technology and data?

Walsh: Absolutely. If you think about one of the original classics in this space – the Innovator’s Dilemma – the idea was that once you’ve achieved success in one aspect, it’s hard for you to reframe situations and opportunities using a new lens. Technology, and in particular algorithms, data, artificial intelligence, are exactly that … they’re all part of a new lens.

So, almost daily leaders have to be asking, “What can we now do that we couldn’t do before? What should be our organizational structure now that we have these new tools available to us and platforms? What is the smart way to get leverage or create value given the new environment?”

That is the new age that we now find ourselves in. And that kind of moving frontier of what people can do, and what machines can and should do, is something that we’re going to see a dramatic acceleration of change around.

How do leaders who have been successful their entire career embrace the need for change?

Walsh: Banking has enjoyed a long period of fairly normal growth. But, there’s no doubt that pain has now started. If you look at some of the dramatic reorganizations and job losses being announced, especially by large European and U.S. operations, you know this isn’t just a reflection of low interest rates and global uncertainty. It’s also the impact of automation and technology on front and back end operations.

So, if you’re a leader at a bank today or any financial institution, there’s no doubt that it’s top of mind that there are some big social and technological challenges on your horizon. The question you face: Is this something that can be solved merely using the tools of the last 50 years? For instance, is it just the simple response of – “too much cost, so let’s cut people”? Or, do we need a more profound and philosophical change in the way we see opportunities and design our organizations?

Are we talking about entirely new principles in play?

Walsh: Yes. In broad terms, I try to draw a line of distinction between leaders [and organizations] designed and born in an analog era versus those from the “algorithmic age.” This is how I would characterize what is going on now. When I say algorithmic I mean it’s not just AI — it’s really the fact that so much of the way we build intelligence and automation and systems now is really baked into code.

What makes algorithmic leaders different is that they’ve found an accommodation with this new world. So, when they make decisions, or solve problems, or lead people it’s always in the context of what’s the smart thing for a human to do versus what a machine should and can do.

In my book, I break this down into ten principles. Some sound a bit abstract, while others make sense immediately, such as “Aim for 10x rather than 10,” “Being able to embrace uncertainty,” “How to design work, automate and elevate” and “Solving for purpose not just for profit.” What really unites these principles is that we’re now in a time when the old models that were relevant in the analog era – which is working hard and charisma and strength, and being out front and being seen to be a great sales leader – don’t work in a time when sometimes the best decision that you can make is not making a decision at all. Or, sometimes the best job you can do is realizing you have to destroy your own job. Or, the best work you can do is actually realizing that you’re better off not working at all, but designing a framework or a system or a model to essentially take over what you do.

That’s a challenging and frightening lesson for leaders because it sometimes means stepping back from taking an active role and realizing that you’re just part of an interconnected whole.

Walsh: Unfortunately, often when people talk about digital transformation they’re talking about digital incrementalism. They’re using robotic process automation or some kind of new system which essentially shaves 10% or 15% off costs or provides a slight bump in revenue. This is not true transformation. You must do more to really get a transformative moment in your cost base or the experiences that you create for your customers.

You’ve got to ask yourself, “What is something that we couldn’t do before that we can now do now, leveraging new technologies and new ways of working in new business models?” If you don’t have a satisfactory answer to that question, you’re not thinking big enough. For example, in the insurance industry, there are a number of players who are at that crossroads of digital transformation versus digital incrementalism.

On the incrementalism side, you’ve got insurers upgrading their services and using robotic process automation for some of their claims processes. Then you’ve got companies like Mass Mutual which created a new company called Haven Life. It had 100 employees initially. 70% of them were data scientists. And their secret weapon was that they were able to go back and look at 15 years of data that the parent company had and analyzed it with their algorithms. The outcome was to be able to sell life insurance online without requiring fluids from the consumer. That idea simply wasn’t possible before. It’s an example of leadership looking for the bigger opportunity.