Forget automation. Are you thinking enough about algorithmic experiences?

Here's the story of how Steve Jobs tricked you. When Jobs delivered his keynote address at the Macworld Conference & Expo in 2007, he pretended to be introducing three products: a widescreen iPod with touch controls, a revolutionary mobile phone, and a breakthrough Internet communications device. You know the ending: these were not three separate devices; they were one device, and he called it an iPhone. But Jobs's real trick was yet to come.

Although the iPhone was sold to us as a convergence of disparate pieces of hardware, it actually led to a divergence of devices from algorithmic experiences. Smartphones were great, but the new world of mobile apps that they made possible was genuinely amazing. These apps were more than just pieces of software; they were algorithmic platforms that had a life beyond just your phone, working seamlessly across whatever platform, device, or operating system you happened to be using.

When you trust your music experiences to Spotify, your relationship to that platform is not limited by your hardware. Besides your smartphone, you can listen to your playlists in your car, on your home stereo, on your laptop, or even on someone else's phone. The same applies to almost all of your algorithmic experiences, whether it be the way you watch TV shows, share photos, talk to your friends, or manage your transportation. Your algorithmic experience transcends your devices.

We are just entering a new age of algorithmic experiences fueled by exponential advances in machine intelligence. It is already hard to imagine getting through a day without interacting with multiple types of algorithmic experiences. When done well, AI implemented by your bank, healthcare provider, or local retailer can anticipate your needs and help orchestrate your life. When designed more maliciously, your smartphone becomes no less than a Skinner box of addiction loops.

The building blocks of any algorithmic experience are intentions, interactions, and identity.

Intentions are the often unarticulated needs or desires of a user or customer, which can be deduced from their behavior. Interactions are the method or manner by which you use a platform, product, or service. Identity is the cognitive or emotional impact of the experience, how it shapes what you do, and the degree to which it has become integrated into a participant's sense of self.

All three elements are connected and self-reinforcing, like a flywheel: anticipating a user's intentions allows you to create more natural interactions, such that the system itself becomes an extension of their identity. And the more an algorithm influences someone's behavior, the more it can anticipate their future intentions, making interactions more effortless, and so on. 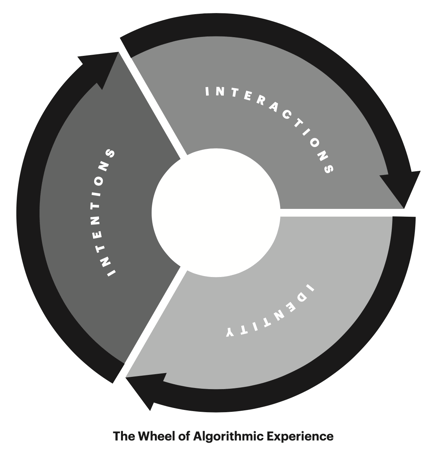 Consider TikTok. A big part of both the social video platform's success and controversy is its uncanny ability to keep you engaged by curating content tailored to you. In a recent blog post, the company shared how its algorithm works. In short, the platform is continuously running automated experiments - surfacing content to a small number of users, measuring engagement with a complex set of weighted signals, and then scaling up distribution based on feedback loops. TikTok is not an app for watching viral videos; it is an algorithmic machine for making videos viral.

The true measure of success for an algorithmic experience is that you stop noticing the algorithm altogether. In other words, it can be considered successful when it disappears. When this happens, searching on Google becomes your transactive memory system, your Instagram feed becomes the collective narrative of your social circle, and Spotify's recommended songs become your musical taste.

Naturally, there is a danger in this. Like video games or slot machines, algorithmic experiences can be designed to manipulate human behavior by weaponizing the reward loops in our brain that lead to addiction. That's not to say that all algorithmic experiences are evil; it is just that any time you are dealing with systems that learn to be progressively better at influencing your behavior, the risk for abuse is substantial.

At the dawn of the 21st century, Apple was able to crush their competitors with a relentless focus on design. Now the stakes are higher. What will it take to win when the design that matters is not hardware, software, packaging, or brand - but algorithmic experiences?

This article is excerpted from ‘The Algorithmic Leader: How to be smart when machines are smarter than you’ - available now on Amazon and Audible.